Some people just can’t leave well-enough alone. For them, behind every good idea there’s a better one, waiting to be liberated. TrailblazersRV founder Phillip Richardson is like that.

Not content with building a keenly-priced, lightweight, off-road pop-top hybrid camper trailer with a full thickness composite body and floor, he has put a full-height wind-out kitchen pod on its front end.

The kitchen module is currently in its fifth development iteration and nearly there, which if nothing else illustrates the price you pay for innovation.

Instead of a conventional slide-out stainless steel kitchen, as all its major rivals have, the entire front nose section of the Eyre moves across the A-frame to extend a full 2100mm out of the left hand side of the camper, forming an ‘L’ with the main body.

Familiar slide-out kitchen elements, such as a BBQ/cooktop, an EvaKool 12v top-loader fridge and a substantial pantry storage area, are located in this pod, with a portable sink and a mixer tap that serves double duty as an exterior shower, folding out of the Eyre’s main body to its right.

The camper’s wind-out awning, covers the kitchen and entry when deployed. 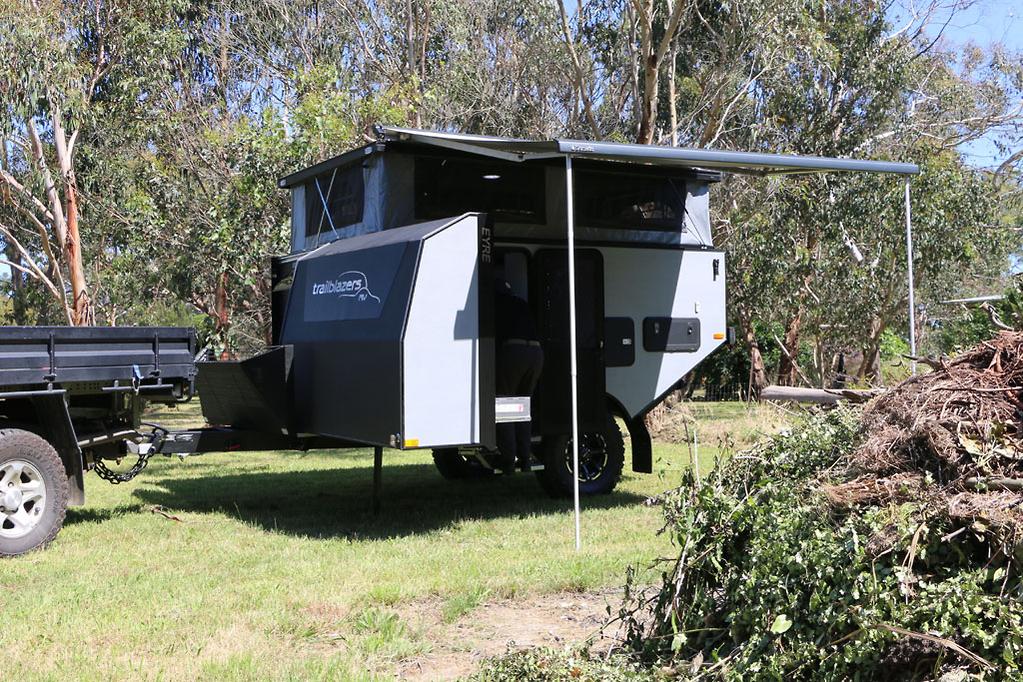 It’s a clever idea that’s currently getting a few final tweaks. For example, the tolerance between the fridge slide and the camper’s body is a bit tight unless you’re careful to extend the kitchen unit fully and there are plans to relocate the shower elsewhere and replace it above the sink with a more conventional mixer tap. But these are details.

What the Eyre’s wind-out kitchen does achieve, is a great, shielded outdoor cooking area with everything at the cook’s disposal.

When out, the kitchen is self-supporting on its sturdy extended arms, and it also allows the slim front hopper-style window on the camper body to be opened, but you need to remember to close it before retracting the kitchen! 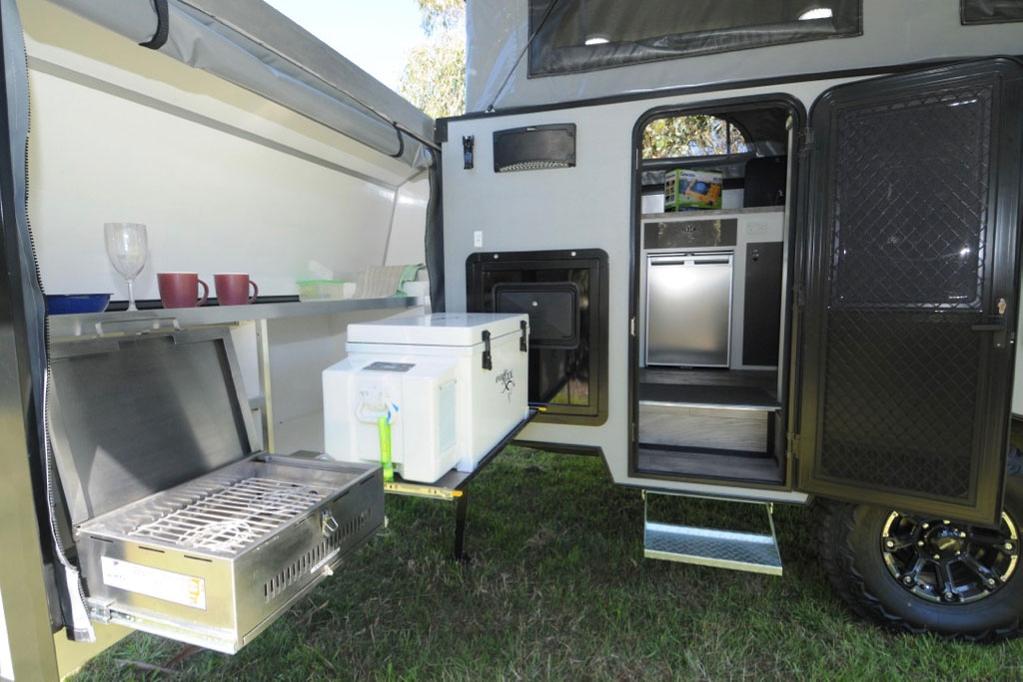 If you thought that was the end of innovation in the Eyre, then wait – there’s more.

The body proper has an extreme cutaway rear end that should allow it to traverse the steepest of creek beds, while providing space for the spare wheel to be stored safely underneath, where its low centre of gravity aids stability.

Of course, with the rear cutaway you give up some external storage space, but the Eyre is still quite well served. The large, wedge-shaped area beneath the bed is accessible externally, while once you’re camped and set up, the Eyre’s A-frame becomes clear for storage; perhaps a secure location for a bike, a generator and so on? Then there’s the body, with its walls made from 28mm full-thickness, imported composite panels and coated entirely with Raptor stone protection in a colour scheme of light and dark grey.

As well as protecting the Eyre from bush scratches, the coating also adds stiffness to the panel to the point where Richardson is considering reducing the wall thickness to 20mm and increasing the thickness of the Raptor coating in some areas to achieve a further weight saving. 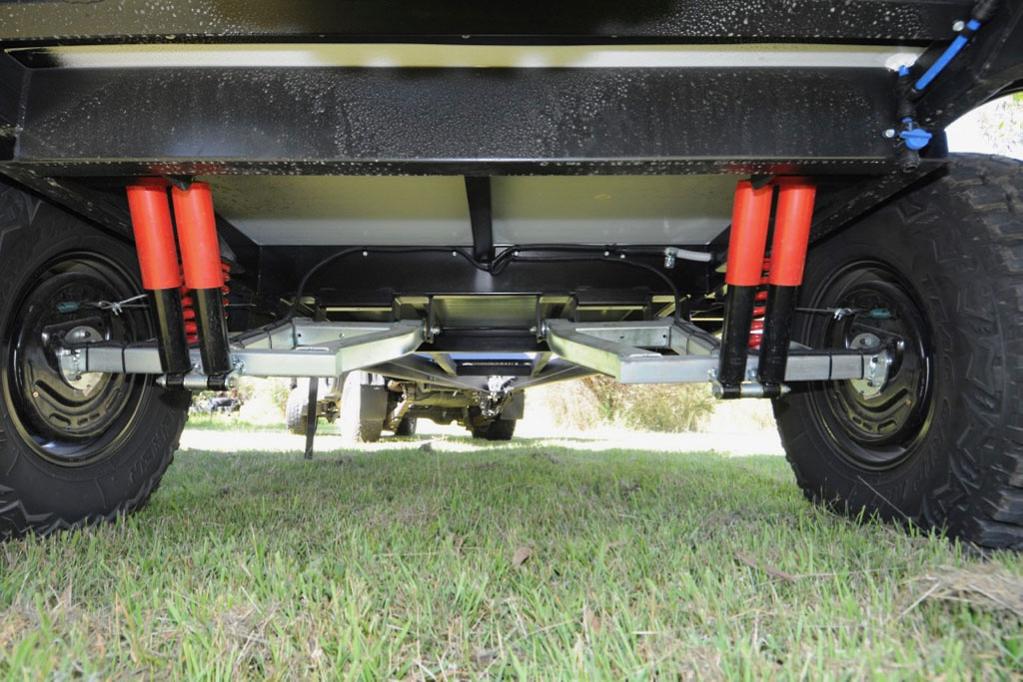 As it is, the Eyre is far from a heavyweight at its tare of 1340kg, which is already good for a micro-hybrid pop-top of its four-metre body length, but he is aiming to get it up to 200kg lower so that the Eyre can be towed even by something as small as a RAV4.

Entering the Eyre means bobbing your head through the door. Once in, the top-top then rises easily with a shove once the external catches are released. An interesting feature about this pop-top is that it has six separate zip-down ventilation panels, allowing plenty of light and air into the interior for a camper of its size. 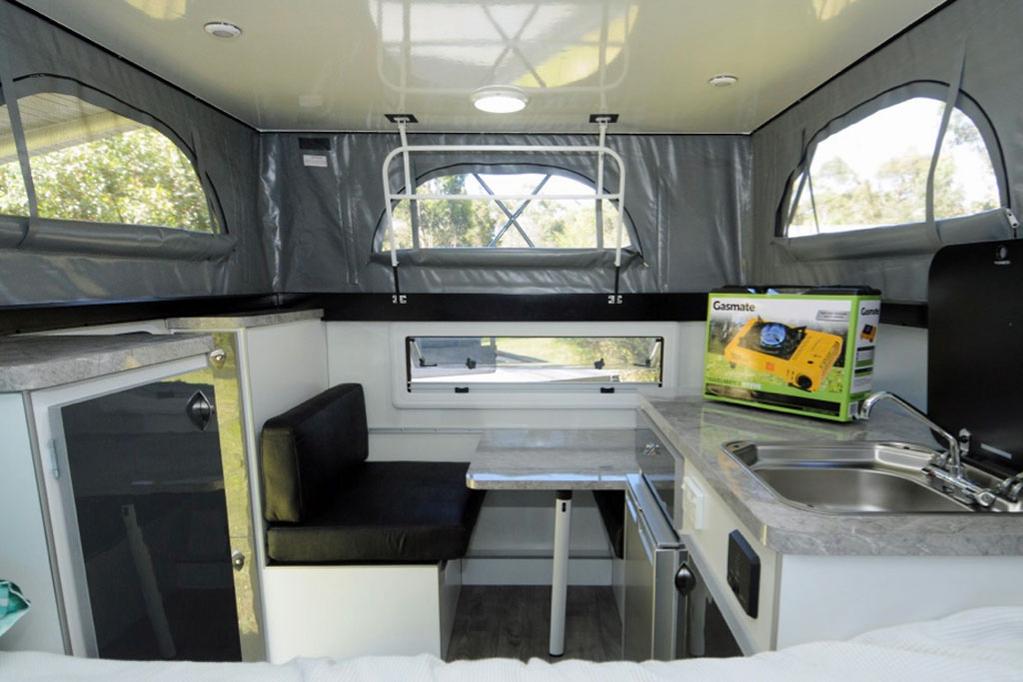 In its current form, the Eyre offers most of the features of its rivals. This starts with a fixed transverse queen bed at the rear above the cutaway, with the two large drawers beneath providing plenty of clothes storage.

There’s no internal stove, but the large serving bench above the 110-litre Waeco internal compressor fridge could accommodate a portable gas cooker in bad weather, adjacent to the standard stainless-steel sink with its mixer tap.

A large cupboard under this sink and a robe, cupboard opposite, provide more internal storage. 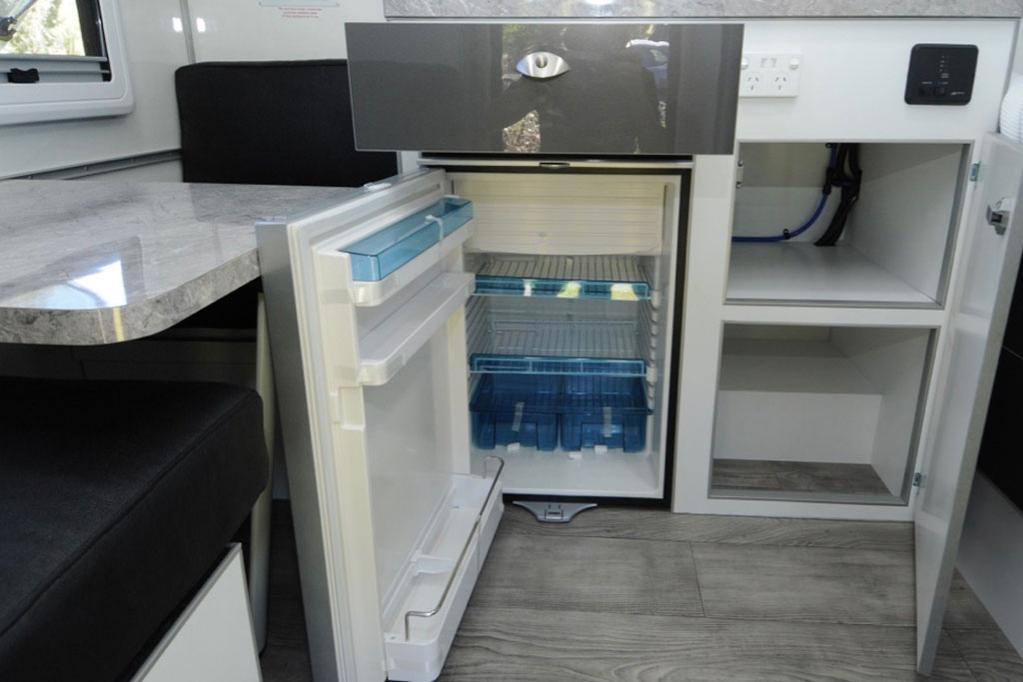 Squeeze into the dinette

The nose of the Eyre is reserved for a café-style dinette with generous seating for two at a table that can drop down to make up a spare bed. However, as it is, there’s little knee-room under the table when it’s set up for dining and it really needs to be raised about 20mm.

However, even fully-optioned, the Eyre is competitively priced for an off-road micro-hybrid of its size and weight. A few more tweaks to that slide-out kitchen should do it Phil!

While that’s happening, further variations of the Eyre are already on the TrailblazersRV drawing board, including a longer model called the Gunbarrel, that will sleep up to five. Stay tuned… 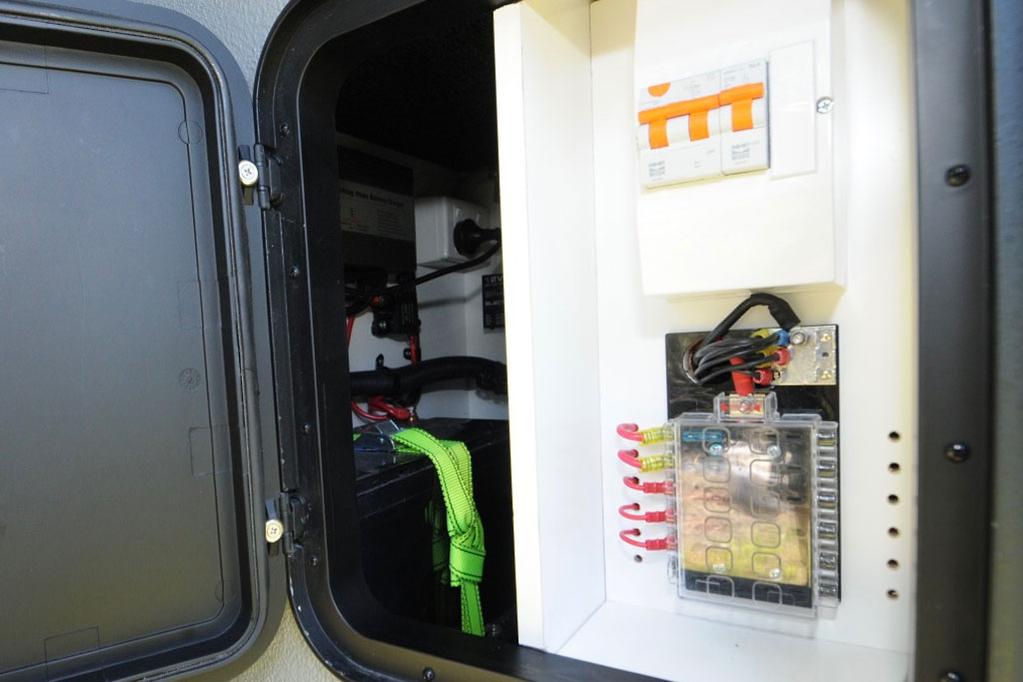 The Eyre is a roomy, light weight and well-equipped off-road camper trailer with some novel features that set it apart from the micro-hybrid pop-top crowd. With a few more tweaks Trailblazers could be on to a winner.