I’ve never previously warmed to 5th Wheeler caravans. Big, heavy and mostly American, they’re often banished to the ‘naughty corner’ of caravan parks, if only because their size usually won’t allow them to slip into a conventional caravan slot.

However, I’ve completely changed my mind after a day with Trailblazers RV’s new 230E ‘off-roader’. In contrast to most others of its ilk on the Australian market, the 230E is light, easy to manoeuvre and takes up less highway space than a conventional rig towing a caravan of its 7200mm (23ft 7in) body length.

In fact, its total rig length is closer to that of a tow car and a 16-17ft caravan, so you feel no freeway fear. 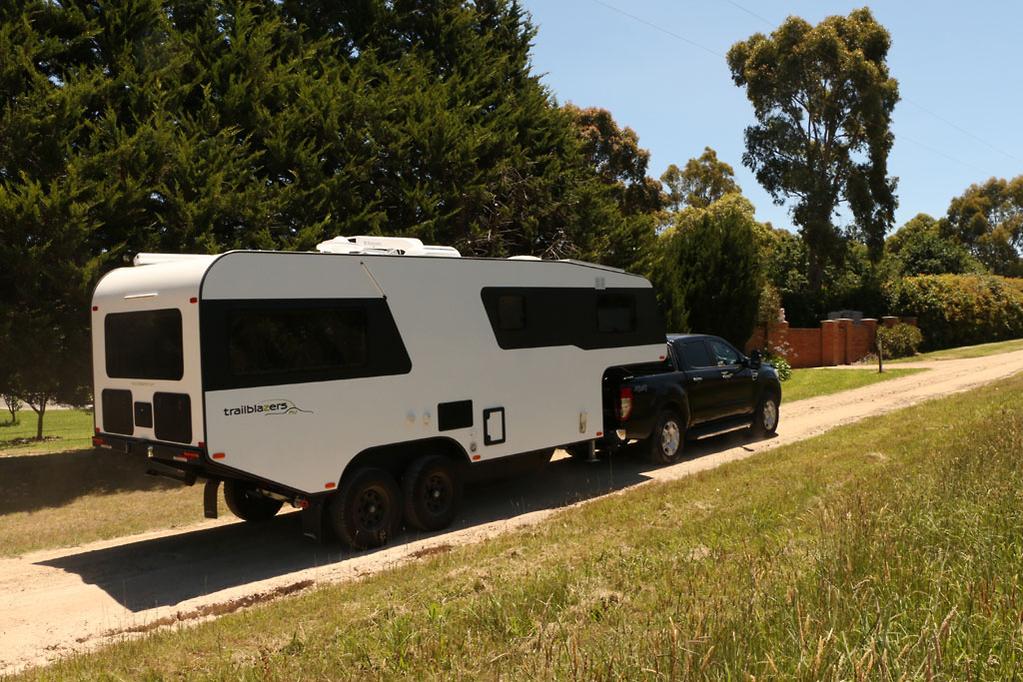 It’s also relatively light by conventional caravan standards, with a Tare of 2400kg – around 300-500kg less than you would expect for a 24ft conventional van with its features – but it really has to be, in order to stay true to its claim to be ‘Australia’s first true off-road 5th Wheeler’.

By ‘off-road’, Trailblazers RV boss Phillip Richardson doesn’t imagine owners will take their 230Es rock-hopping, but he does expect to see them on Australia’s major Outback highways, corrugated adventure tracks like the Gibb River Road and making their way into bush sites to remain, off the grid, for many days at a time.

And to get there, the 230E can be hauled behind virtually any of the current crop of single or crew-cab utes. The other thing that makes the 230E suitable for travel off the beaten track is its comparatively slim 2300mm body width that allows it to follow a large 4WD down tracks that would daunt a regular highway van.

Combine that with its tight turning circle, thanks to the ability of the vehicle to jack-knife more than 90 degrees with its pin box extended and it’s surprisingly handy in the bush.

Assuming that owners might want to do this, Richardson has made the 230E self-sustainable for extended periods away from 240v power. 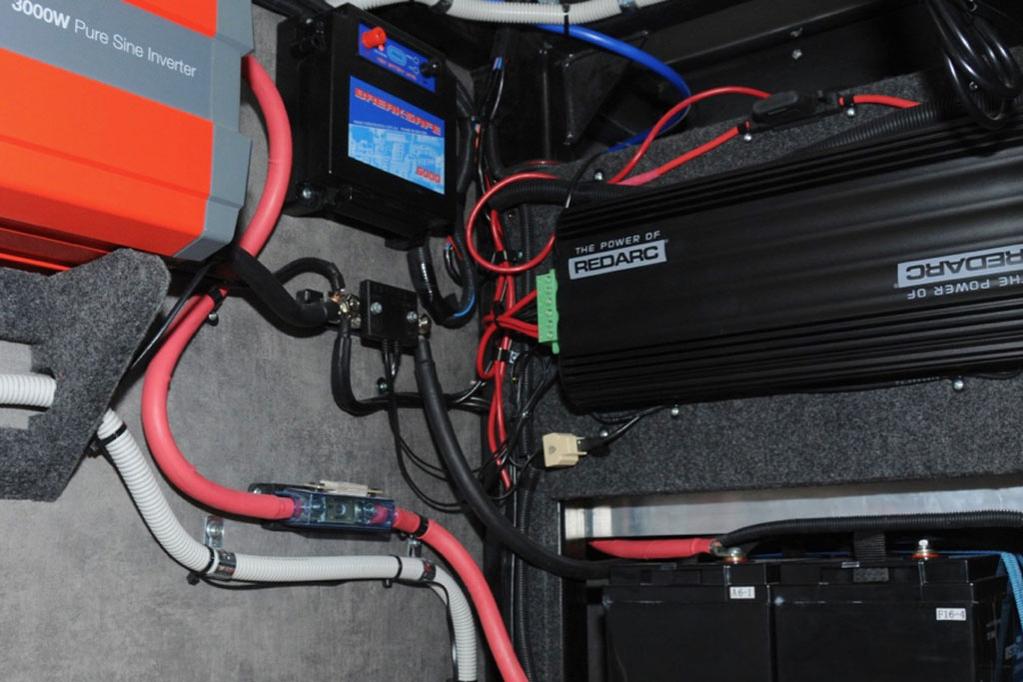 So, you can cook, shower, make coffee and even run the ‘soft-start’ Dometic air conditioner in the most remote places.

The 230E also seems to be well-built in all the right places to get you there.

As well as being slim, the vehicle’s full-thickness, smooth fibreglass composite walls and roof and thick composite floor result in a strong monocoque body that sits on a sturdy, galvanised steel chassis, while the upswept rear bodywork allows the spare wheel to be underslung to keep weight low, Trakmaster Pilbara style, without compromising its departure angle. 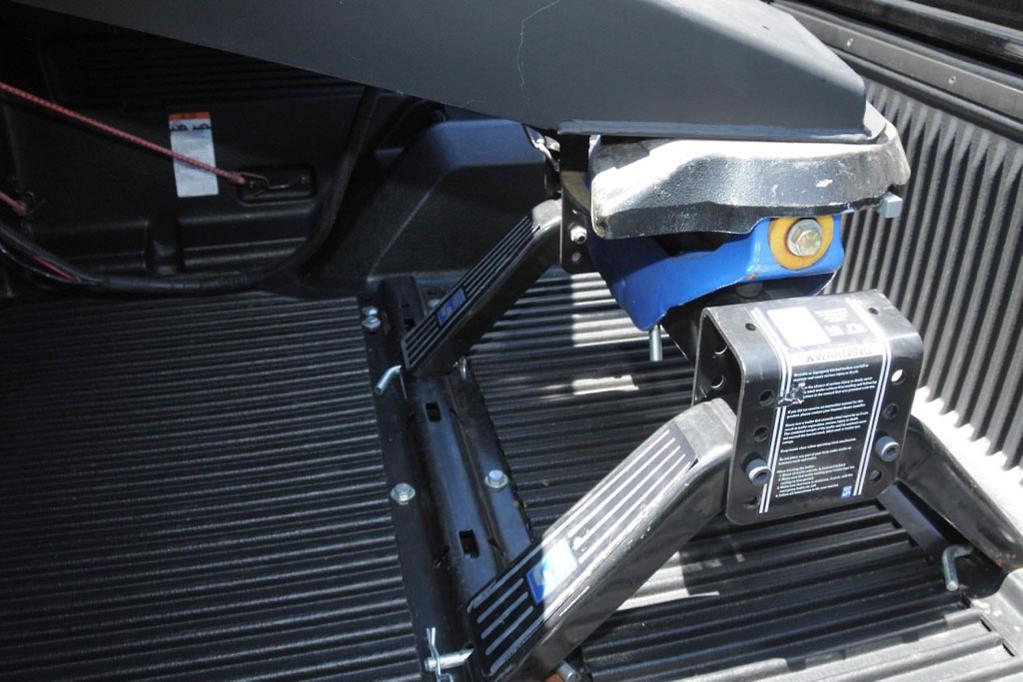 Up front, a Hayman Reese Sidwewinder pin and R16 hitch keeps the pin weight of 590kg right above the rear axle. There’s still room in the load bed of a Navara or Ranger to carry a number of things like chairs and tables without impeding the turntable, but you can also remove the coupling completely by withdrawing its locking pins and spring clips once you are set-up on site if you need more space.

A great feature of this coupling is that it allows the caravan to be hitched from any angle and it takes only a few minutes to deploy the electric front corner jacks to de-couple. 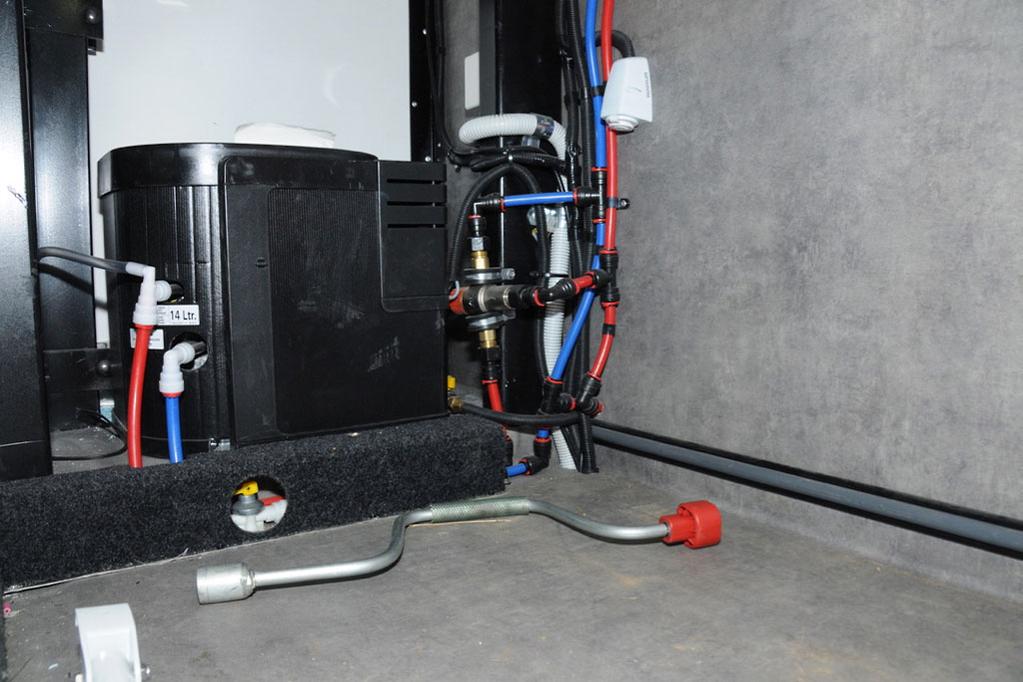 Inside, the 230E is every bit as comfortable as you would expect an off-road caravan of its length to be, with little left off its impressive spec list.

The queen bed, located up a short staircase in the front body section that overhangs the hitch, contains twin robes and bedside tables and is light-filled and airy, thanks to large flanking windows and a large roof hatch. Here the air conditioning is supplemented by a 12v Sirocco fan.

Back in the van’s main body there’s a compact separate shower and toilet bathroom opposite the front centre entry door, with one half of the galley, consisting of a Waeco 190L compressor fridge-freezer and a microwave oven under a preparation hatch and a cupboard housing the van’s main fuses, to its right.

Opposite, buyers get a 3+1 gas/electric cooktop and griller, flanked by two preparation benches (one of them a hinged benchtop extension) plus a stainless-steel sink with mixer tap. 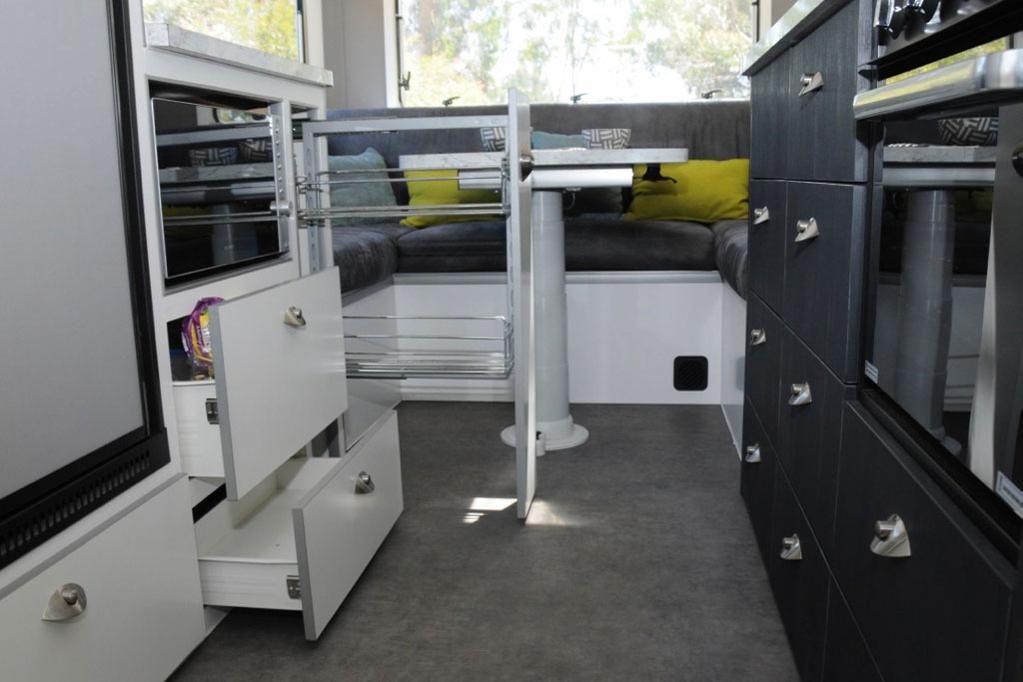 All about the club lounge

The reason for this split-kitchen layout is to allow the entire rear of the 230E to be filled by a great U-shaped club lounge, surrounded by panoramic windows, with a hydraulic, height-adjustable single pedestal table in the middle, that when dropped and the cushions re-arranged, forms another queen-size bed.

Washing machine? Yes, but you’ll need to search for the top-loader in the cupboard to the left of the entry door, but it’s there, along with oodles of other inside storage areas, both at floor and roof level. 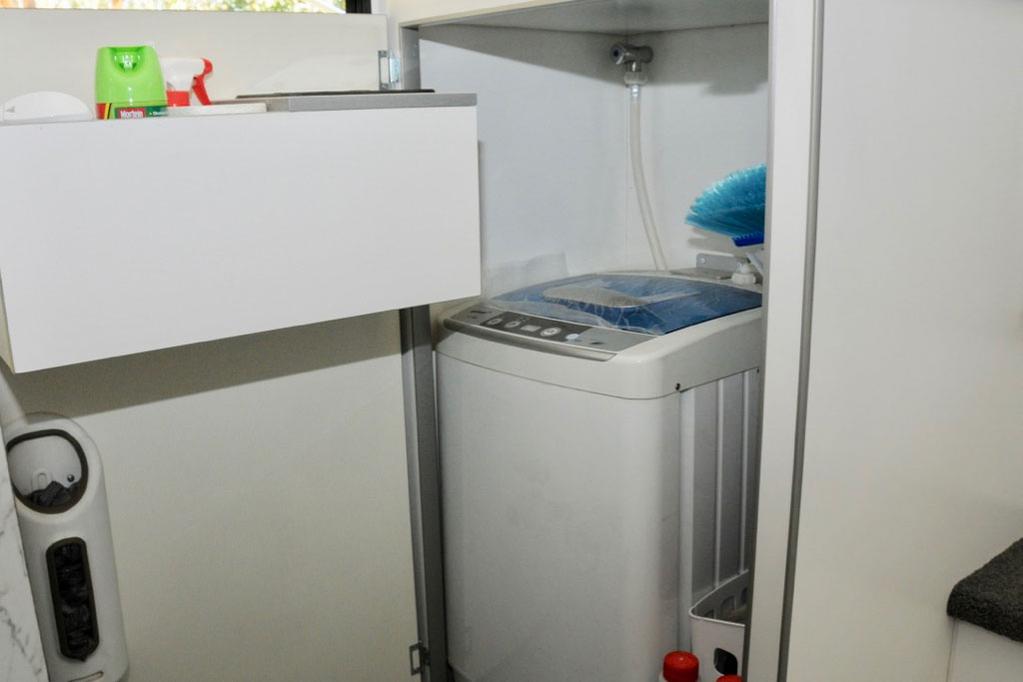 Outside, the 230E is also well suited to warm weather living, starting with its electric roll-out awning, deployed by a switch next to the one that lowers its two-tier electric aluminium step.

Twin drop-down picnic tables on the left-hand side allow one to hold the 230E’s optional stainless-steel BBQ, or a Weber Baby Q, while the other acts as a prep bench.

Want more storage? There’s a cavernous area under the bed in the body’s front that will swallow all the matting, hoses and other messy things you might want to carry, while two large-opening, but shallower storage areas flank the 230E’s external rear shower. 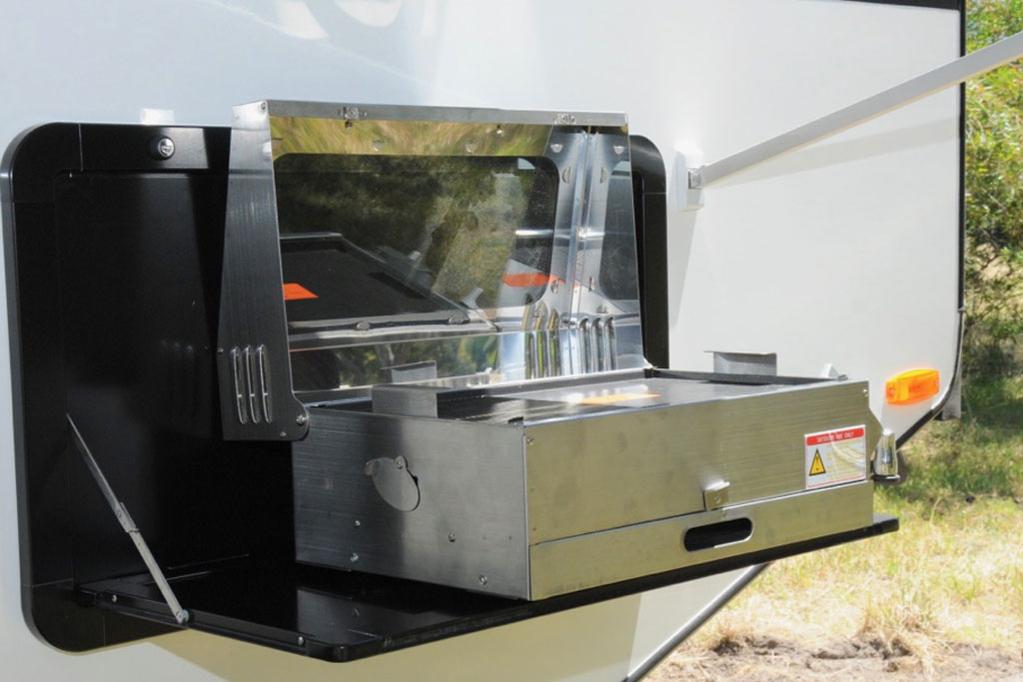 This is a lot of 5th Wheeler for its $140,000 asking price (as reviewed). it compares well with similarly equipped conventional off-road caravans and should suit long-term travellers.

If you’re still slightly daunted by the thought of taking the 230E off-road, Trailblazers has an alternative – a shorter 180E model (18ft long) currently in the pipeline, which is the equivalent to towing a 13-14ft off-road caravan.

Cooking: 3 + 1 gas/electric with grill inside and stainless-steel BBQ outside